Showing posts from September, 2022
Show All

- September 06, 2022
Montreal, September 7  2022 – Some of the ever-lasting images of September 11,  2001 were the brave first responders rushing into the World Trade Center – and to mark the 21 st anniversary of the terrorist attacks, this Thursday (10 am), September 8 students from four EMSB schools will spend the day at Montreal’s Firefighter Training Centre (6700 Rue Notre-Dame Est). In the morning, students from Rosemount High School and Nesbitt Elementary in Rosemount and Perspectives I and Perspectives II High Schools in St. Michel will formally commemorate the anniversary of September 11 th . This ceremony will include a virtual testimonial from Bill Spade, retired FDNY firefighter who responded to the World Trade Center on 9/11 as well as reflections from Gordon Routley, Assistant Director of the Montreal Fire Department and other local first responders. In the afternoon, students will participate in interactive workshops with the firefighters that focuses on their training and work in the
Read more 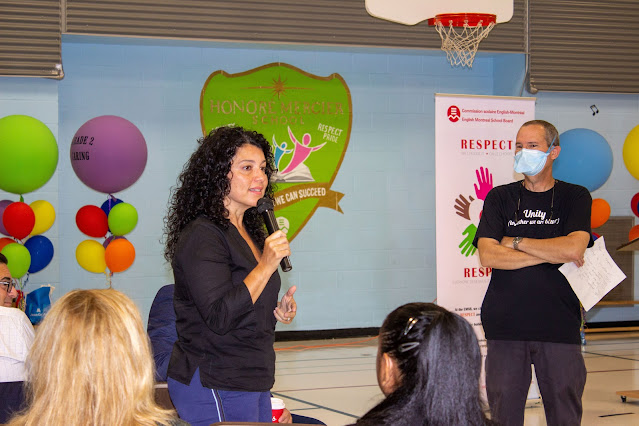 Montreal, September 6, 2022 -  On the eve of a provincial election, which will take place on October 3, the English Montreal School Board  will be  engaging with candidates to bring forward important issues related to public education . As a pedagogical exercise, the EMSB will organize a bilingual virtual information session for Tuesday afternoon, September 20 at 1 pm that will be streamed live into classrooms across the school board. Representatives from each political party will be invited to participate.   EMSB Chair Joe Ortona and Director General Nick Katalifos will give opening remarks. Two members of the English Montreal Student Advisory Council (EMSAC) will serve as moderators. The session will be broadcast live on YouTube, with students being able to ask questions via the chat function. In addition, some schools will also organize in-person or virtual sessions with their local candidates. These meetings are apolitical and are intended to provide a method for students to le
Read more
More posts